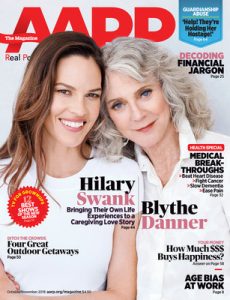 issue of AARP The Magazine

At first, Blythe Danner and Hilary Swank seem utterly different as you watch them chatting together in a vast white room in Manhattan on a fine summer morning.
Swank, 44, a buff former high school gymnastics champ who grew up in a trailer park in Washington state, is direct, peppy, coachlike. “Make a choice about the optimism you want to bring into your life!” she exhorts us at one point.

The imperially slim Danner, 75, a Philadelphia banker’s daughter, is reserved and self-deprecating, even after a half-century of acting triumphs. Though she introduced her daughter, Gwyneth Paltrow, to acting, she says Gwynnie is the genius in the family. “She has such self-esteem and self-awareness, all the things I never had,” Danner notes.

Yet in person and certainly professionally, Danner has more presence and power than she admits to. She won a Tony award at age 27 and Emmy honors for her roles on the TV shows Huff and Will & Grace. Swank, too, has shone brightly in her career, winning two Oscars for best actress in a leading role (for Boys Don’t Cry and Million Dollar Baby).

And both are artistically ambitious, empathic people who’ll touch your arm for emphasis within minutes of meeting you. “We’re touchy-feely,” Danner murmurs. “My director in a play kept saying, ‘Stop touching everybody!’ ”

But more to the point, both have endured deeply challenging caregiving experiences in real life. And those trials have imbued their roles in their new movie together, What They Had — in which Danner plays an Alzheimer’s disease patient and Swank portrays the daughter who clashes with her brother (played by Michael Shannon) over proper care of their mom — with depth, conviction and even love.
Danner cared for her husband of 32 years, St. Elsewhere producer Bruce Paltrow, during his off-and-on battle with oral cancer during the last few years of his life; he died of complications soon after daughter Gwyneth’s 30th birthday in 2002. As for Swank, just over three years ago she discovered that her father, who had frequently been absent in her youth, was about to undergo a lung transplant. The five-year survival rate is just over 50 percent; it promised to be a brutally hard convalescence. Swank did not think twice, insisting her dad move into her Los Angeles home, then putting her career on hold to care for him as best she could.

“Three years as your dad’s only caregiver — I don’t think I’m equipped with the patience to do that,” says Danner, whose husband’s final stage was comparatively brief.
“I didn’t think I’d be, either,” Swank replies. “But when it happens, you muster it up.”

As it is on-screen, the chemistry between the two actresses as they tell stories and answer questions this day is undeniable. And that’s partly why writer-director Elizabeth Chomko, who based the movie on her grandmother’s 16-year struggle with Alzheimer’s, was thrilled to snag them for the roles. “I was just blown away watching them become this utterly believable family,” she says. “Blythe had the spirit I’d seen in my grandmother — childlike, playful, funny, haunting, turning on a dime. And she misses her husband, Bruce, which she beautifully drew upon.”

For Swank, the film is a comeback after years of being out of the spotlight; for Danner, an autumnal run for an Oscar. But both say awards and glory are not the point — inspiring people to take action is. “Remember not to take things for granted,” Swank cautions. “You’re not always gonna be able to pick up a phone and call a loved one, so do it now.”

There were no men in the picture when Swank and her mom drove from their Bellingham, Wash., trailer park to Los Angeles in 1990 with $75 between them. Living out of their Oldsmobile, Judy (who that year had divorced Swank’s dad, Stephen, and lost her job) made call after pay phone call on behalf of her teenage daughter until Swank was finally cast in small parts and then in Beverly Hills, 90210. Fans preferred her character’s love interest to be single, and Swank got fired before the season ended. But that proved to be her biggest break: She then took the $75-a-day job on Boys Don’t Cry, which earned her an Oscar at age 25 and in turn got Clint Eastwood to cast her in Million Dollar Baby. With her win for Baby in 2005, she became one of only 14 women to receive more than one best-actress Oscar.

Over the next decade, Swank never stopped working, starring in a dozen films. But she gravitated to smaller movies and largely portrayed women she considers heroes, such as Amelia Earhart and Betty Anne Waters (who put herself through college and law school in her 18-year quest to free her brother, wrongfully convicted of murder in 1983). The awards fell away, and Swank’s box office appeal dropped: In 2007 and 2009, she won the Alliance of Women Film Journalists award for actress most in need of a new agent.
Swank says she didn’t fret. “I’m not in it to win awards,” she asserts. “Playing Betty Anne, Amelia — brave, courageous women who persevere through adversity — that’s my award.” And the roles continued to pay. She owns an L.A. mansion and an apartment in New York City.

Meanwhile, her offscreen life kept her busy: In 2007 her 10-year marriage to actor Chad Lowe (who struggled with substance abuse) came to an end; in 2014 she started the Hilaroo Foundation, whose camps pair rescue dogs with at-risk kids. She dated and was briefly engaged to financial adviser and tennis coach Ruben Torres. Then, in 2015, she abruptly pared her work way back to be her father’s caregiver as he recovered from his lung transplant.

“I drove him to hospital appointments; he’d have breakfast — that was my workout time — we’d have lunch; I’d make his dinner,” Swank remembers. “There were a lot of scares, but this was our life.”

As difficult as it was, she says it was the chance of a lifetime, because her traveling salesman dad (who also served in the Oregon Air National Guard) had been mostly away working during her childhood. Caregiving, Swank says, “was kind of a time that I didn’t get to spend with my dad as a child and did get to spend then.”
And she makes no bones about its effect. “Caregiving changed me for real and forever,” she says. “What I used to stress about was silly and inconsequential. All I’d done since I was 15 was act. Taking that away gave me space to recognize I’m so much more than this thing I define myself as.”

That perspective, it seems, opened up her personal horizons — she married social-venture entrepreneur Philip Schneider in August — and has also helped her regain her acting mojo. She won plaudits as J. Paul Getty III’s mother in Danny Boyle’s 2018 miniseries, Trust; played a patients’-rights lawyer in 2017’s well-received 55 Steps with Helena Bonham Carter; and now joins Danner in a film that has already garnered Oscar buzz for both of them.

What They Had is, at its heart, a love story, and actresses of Danner’s and Swank’s caliber can easily conjure that emotion for film. More difficult is channeling Alzheimer’s — and for that, Danner studied films of Chomko’s grandmother to capture her fluctuating feelings and thoughts, which skipped like a dusty record every six seconds or so. “She was a brilliant woman who knew this was slowly happening to her,” Danner says. “It’s like a slap to the face.”
The new film also pulls back the lens from the patient — the subject of most Alzheimer’s films — to focus on caregivers. “It’s about a family,” Danner adds. “It’s about what normal people are dealing with — so many people are taking care of parents.”
Swank’s character is torn between sending her increasingly ill mom to a “memory facility” and keeping her home with her doting caregiver dad, played by Robert Forster, 77. “It’s hard, because you don’t want to be in denial, but you also don’t want to give in,” says Swank, alluding to her father’s many hospital stays and dire bouts with pneumonia following his operation. Her personal caregiving tale has a happy ending: Earlier this year her father passed the three-year mark of his transplant, and, she notes, “one day I woke up and his truck was gone.” Not forever — he just felt good enough to run an errand; he still lives at her house. But Swank could get back to work and, ironically, to this film on caregiving.

The father’s stubborn wish for his wife to stay home — and stay the same — is at the crux of the absorbing film and raises issues that many caregivers face, whatever their loved one’s condition. And the film does so with a kind of sustained bittersweet humor that sets it apart. “It was hard for me to watch all those wonderful Alzheimer’s movies,” says director Chomko, referring to films such as The Notebook and Iris. “I left them feeling so wrecked. When we dealt with my grandmother, my family laughed like crazy — we’re full of laughers and teasers.”

“It’s trying to find that balance, the levity within the moments that are so challenging,” Swank explains. “My character laughs into crying.” She and her father often had contradictory emotions during his grueling recovery, as did Danner and her late husband with his disease. “Bruce was so damned funny,” she says. “I once made macrobiotic cookies and said, ‘Honey, these are so good for you.’ He bit into one and went, ‘It’s like biting into the New York Times.’ We cracked up!”

Danner often reads the work of the poet William Wordsworth, who spent 20 years as a caregiver to his dementia-afflicted sister. The actress likes his idea that the meaning of life is found in “spots of time,” vivid bits of memory that arise spontaneously years later and connect us with our deepest selves and those we love: “I think more and more about those spots of time. It’s so wonderful.”