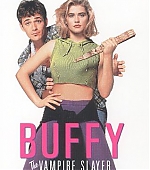 Buffy is an air-head cheerleader who is chosen by a guy named Merrick to fend the world of Vampires. When Merrick first informs Buffy that she is the “chosen one,” she thinks he’s crazy, but then strange things begin to happen.

First, Buffy’s friend Cassandra and many other kids form her school turn up missing and are later found “dead” with bite marks on their necks. After many other strange ocurrences, Buffy then realizes that those bite marks were made by vampires, and that they really are out there. She comes to to horrifying truth that she is the “chosen one.” 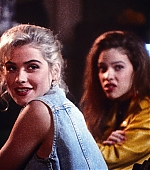 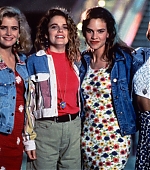 Trivia & Facts
• Ben Affleck appears in one scene as a basketball player.
• Seth Green, the only person in the movie to be in the spin-off show, was cut from the movie, but still appears on the video cover
• Buffy’s last name is never mentioned in the movie. Not until the release of the series was she referred to as Buffy Summers.
• In the original version of the script, Merrick committed suicide to escape being turned into a vampire by Lothos, who wanted to know the Slayer’s identity so he could dispatch with her.
• The original script by Joss Whedon was heavily re-written to make the film “lighter”. In the original script, Buffy burns down the school gym that the dance is being held in, in an effort to destroy the vampires. In the television series (“Buffy the Vampire Slayer” (1997)) this fact is referred to several times, as the series is seen as a spin-off of the original, unproduced screenplay rather than this film.

• In the original film script, Buffy burns down the gym to destroy the vampires in the end. This is referred to in the series opener.
• Alyssa Milano was originally set to play Buffy.
• Joss Whedon was so frustrated by how much of his vision was being mishandled and how much of it was being rewritten that he eventually left the set during production and never came back.
Hilary Says
• Currently no quotes.
External Links
• Trailer
View trailer in media players like Windows Media, Real Player and Quicktime.
• Official Site
The official movie site.
• Internet Movie Database
Additional cast and credits. Plot summary and more.