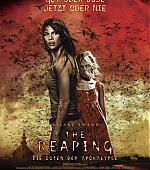 
A former Christian missionary who lost her faith after her family was tragically killed, and has since become a world-renowned expert in disproving religious phenomena.

But when she investigates a small Louisiana town that is suffering from what appear to be the Biblical plagues, she realizes that science cannot explain what is happening and she must regain her faith to combat dark forces threatening the community. 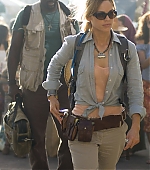 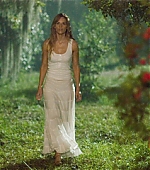 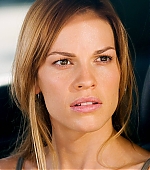 Trivia & Facts
• Filming in Louisiana was interrupted by Hurricane Katrina.

Hilary Says
• “There were a lot of elements about this movie that I liked. One was that I’d never seen a movie like it. I couldn’t pinpoint anything else that reminded me of it. It’s a supernatural thriller. There’s scary elements, but it’s scary because it could have happened, like back in Biblical days. It’s dramatic; it has religious undertones. And the idea of the analogies to life for me, like things aren’t always what they seem and how I make quick judgments on things or experiences or people and always trying to remain open.”

• “I loved how she had such a strong belief in something and she lost her faith because of something that happened to her, and how she regains her faith through the film because of things that happen that she can’t answer. I found it all really intriguing. I thought about it after I finished the script. I kept thinking about it. And the twist… There’s a twist that I didn’t see coming. I see twists coming a million miles away and I didn’t see it. I couldn’t believe I didn’t see it. I was like, ‘How did I miss that?'”

• “I am always fascinated by what makes life work. What’s behind it all, what’s it about. And this movie has those elements to me. It asks a lot of those questions.”

• “I think that a lot of problems stem from organized religion, and yet I’m a spiritual person, and I’m not saying that … all problems come from that. But it is interesting how religion plays a part in the world. It was about the plagues, the 11 plagues. Did they happen? Did they not happen? Is it going to happen again? What’s happening in the world?”