The focal point of the film is the countdown to 2012, represented by the ceremonial “ball drop” in Times Square. Imagine one person being responsible for seeing that this spectacle goes off without a hitch, live, while the eyes of the world watch… and that would be Claire, portrayed by Hilary Swank.

Swank, who trained with her real-life counterpart for the role, admits, “I had no idea of what goes on behind the scenes. As an audience member you think someone pushes a button and it just happens, but there is so much that can go wrong. From the time you meet Claire to where the story ends there are a lot of dramatic and funny things that happen on that platform, any of which could potentially ruin the entire event—not to mention her career.”

As she struggles with the logistics of keeping it all on track, while holding the media at bay and trying to keep everyone’s midnight appointment with tradition, she is privately mindful of another important appointment she means to keep when all the hoopla is over. 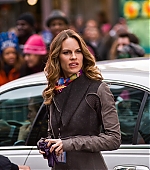