Away is coming to Netflix this fall.

The upcoming drama series stars Hilary Swank as Emma Green, an American astronaut and former Navy pilot who’s described as “headstrong, empathetic and highly intelligent.” Emma is the commander of the first mission to Mars. But as she prepares her international crew for the mission, she has to grapple with the fact that it means leaving behind her husband, Matt (Josh Charles), and teenage daughter, Lex (Talitha Bateman), for three years.

The series, created by Andrew Hinderaker, follows Emma on her journey as the personal dynamics and effects of being away from home become more and more complex. Jessica Goldberg serves as showrunner with Jason Katims, Matt Reeves, Andrew Hinderaker, Edward Zwick, Hilary Swank, Adam Kassan, and Jeni Mulein all on board to executive produce. Rounding out the cast is Mark Ivanir, Ato Essandoh, Ray Panthaki, Vivian Wu, and Monique Curnen. The series will debut globally on Friday, Sept. 4 on Netflix.

Check out a teaser for the series above and first look images below. 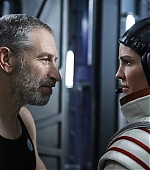 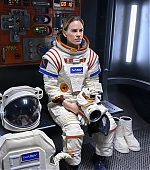 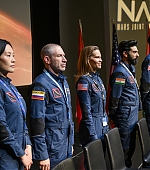 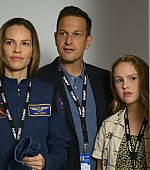