Hilary Swank will reprise the role of Holly Kennedy in Postscript, the sequel to PS, I Love You.

Author Cecelia Ahern revealed the news that the second book in the series will be adapted for the big screen and once again star the Oscar-winning actress.

Speaking to Ryan Tubridy on RTE Radio 1, the best-selling author revealed that Swank had contacted her directly about returning for the role of Holly Kennedy.

“One of the first people to email me when she heard the news was Hilary Swank,” she said.

PS, I Love You was published in 2004 when Cecelia was just 21 and she sold a million copies. The author has now reached sales of over 25 million in 50 countries and penned 12 books.

Postscript picks up with Holly seven years after the death of her husband Gerry. Speaking to the Sunday Independent recently, Cecelia said it was the hardest book she has ever had to write and was initially reluctant to write it.

“When I got the idea I was like ‘I’m still not going to do it’. But the idea wouldn’t go away,” she said.

“It kept growing and growing, and I heard the sentences in my head. And that’s when I know I need to write it. So I secretly wrote the first chapter to myself. Just to see how it was going to go. And I cried my eyes out. It really touched my soul, I was right back to when I wrote P.S. I Love You. I was right back in there.”

She said the process of writing Postscript was ‘intense’ because it brought her back to the time when she wrote PS, I Love You.

“And I think that was why writing Postscript was doubly so, not just because of the subject matter, but because it was so linked to my experience the first time. It kept bringing me back to who I was and how my life was and how things changed.”

PS, I Love You was adapted for the big screen in 2007 starring Swank and Gerard Butler. It was filmed across locations in Ireland.

One day after President Donald Trump launched an attack against “racist” Hollywood – a tirade that appeared to be inspired by the upcoming film “The Hunt,” starring Hilary Swank – the actress told reporters at the Locarno Film Festival that it’s “important to celebrate our differences” and that the president’s divisive politics haven’t changed her intent to tell meaningful stories.

“My desire to tell certain stories has always been the same, no matter who the president is,” she said. “The choices that I’ve made pretty much inform who I am as a person, and that’s not going to change no matter what’s happening.”

Swank co-stars in the upcoming Blumhouse film about a group of strangers who wake up in a forest, only to discover they’re being hunted for sport by rich vacationers. Universal suspended its marketing campaign for “The Hunt” in the wake of last week’s shootings in Dayton, Ohio, and El Paso, Texas, while Fox News and other conservative outlets have criticized the film ahead of its Sep. 27 release.

END_OF_DOCUMENT_TOKEN_TO_BE_REPLACED

Hilary attended the Leopard Club Award during the 72nd Locarno Film Festival on August 9 in Locarno, Switzerland. She received the prestigious Leopard Club Award, which is the festival’s lifetime achievement award, in recognition of her work.

The 45-year-old actress looked stunning in an asymmetrical Giorgio Armani cocktail dress, that featured a sparkly ruffled blue skirt underneath a more structural waist and bust in shades of black, cream and blue. 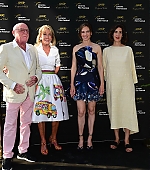 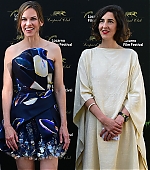 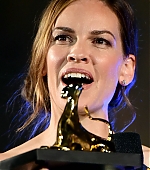 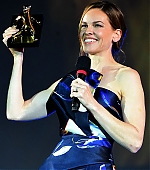 Two-time Oscar-winner Hilary Swank will be honored at the 2019 Locarno International Film Festival with a lifetime achievement award.

Swank will receive the festival’s Leopard Club Award, given to “a major film personality whose work has made a lasting impact on the collective imagination.”

Swank will attend Locarno to receive the award, which will be presented at the Swiss festival Aug. 9. Locarno will also screen the two films for which Swank won Oscars: Kimberly Peirce’s 1999 drama Boys Don’t Cry, in which Swank plays transgender teen Brandon Teena, who was raped and murdered in Nebraska in 1993; and Clint Eastwood’s Million Dollar Baby (2004), in which Swank plays a female boxer who, after a brutal fight, is left a ventilator-dependent quadriplegic.

Swank has recently attracted attention for her television roles. She starred on the FX drama Trust, and has been tapped to topline Netflix’s upcoming space drama series Away as Emma Green, an American astronaut who must leave her husband and teenage daughter behind to command an international space crew embarking on a treacherous mission. Swank began her career in television with a recurring role in the late 1990s on Beverly Hills, 90210.

But the actress hasn’t abandoned the big screen. Swank starred in Grant Sputore’s Australian sci-fi thriller I Am Mother, which Netflix picked for North America out of Sundance, and Blumhouse recently cast her in its upcoming politically charged action-thriller The Hunt.

Swank is repped by WME, Management 360 and Jackoway Austen.